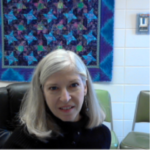 “I pick “ethics” and “dissemination.” I’m interested in studying how health care/medical forms are designed and used—in short the whole genre system of health care/ medical forms—to create a “view” of the patient and impact treatment and health decisions. These forms are used to structure the work of the health workers, and thus are disseminated across the health treatment clinics. The ways in which these forms are designed and used can have significant ethical impact on the health workers, the patients, and society.”

My early stage research picks up from my earlier exploration of document design in health care forms. Earlier I argued that the design of these forms reflects societal changes in professions and disciplines, specifically that of business and medicine. I have also argued that in the business of medicine, some poorly designed forms can actually be quite effective at achieving the goals of some players in the health care arena. For this symposium, I intend to follow these earlier entrees in the genre system of health care forms, looking more specifically now at medical treatment forms, arguing that these forms are more rhetorical in their purposes than what current document design theories advocate. I further argue, using theories from embodied rhetoric and visual rhetoric, that these forms create a “view” of the patient that elides the humanity of the health sufferer, the forms may significantly impact treatment plans, and they may influence health decisions by health workers, patients, and society. In my symposium presentation I will show that the health and medical forms have different purposes, values, and ideologies than what the readers of the forms may expect. In short, it is the place of origin of the forms that determines the document design, not the needs of the audience.