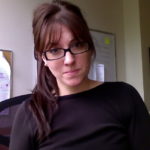 Mostly, I’m interested in how people make decisions. And because sites of medical practice are so complex (mediated by a wide range of expertise, technologies, languages, visuals, and other embodied sensory input), I tend to turn my investigative lens thusly. Some recent observational sites include the Food and Drug Administration, hospitals’ tumor board meetings, pharmaceutical clinical trial procedures, physicians’ use of electronic medical record software systems, and pathologists’ laboratory practice of visually rendering bodies’ data.

I’m in the early stages of a book-length project tentatively titled Decriminalizing Uncertainty: Studies of Communication and Human Health. Each chapter in this book examines a particular case wherein uncertainty about future action persists. Subjects for each of these cases are informed by several recent events. First, I’m haunted by the Italian government’s imprisonment of scientists who did not accurately predict and/or report an earthquake threat. This case is complicated not only by how scientists know, with some certainty, about an event that’s yet to occur, but also how they communicate it to non-scientists, and then to whom they’re beholden when failures occur anywhere along that long line of scientific practice. While this case isn’t explicitly “medical” in nature, it is about human health. The L’Aquilla, Italy events became heuristic for me as I encountered other more medically relevant uncertainties.

Consider, for instance, Angelina Jolie’s decision to undergo preventative surgery after testing positively for the BRCA gene mutation. This case not only initiated popular discourse about women’s health, but it drew attention to the complex relationship between knowledge or certainty about future events and unequal distribution of (healthcare) resources.

This book is also in response to a project I completed with S. Scott Graham wherein we tried to better understand how decisions about pharmaceutical approvals were made by key stakeholders within or affiliated with the Food and Drug Administration (FDA). One of our key findings is that there is little to no way for medical and scientific experts to measure or quantify clinical benefits provided by certain drugs that aren’t obviously related in one way or another to overall survival. In other words, say, for instance, a drug improved a patient’s quality of life but did not actually help them live longer. Drug companies, patients, patients’ families, and any other stakeholder advocating for the effectiveness of the drug is hamstrung. They cannot provide the evidence that matters to the decision-makers (overall survival), and so their testimonies are largely dismissed. Scott and I believe there has to be a better way, and we draw on Callon, Lascoumes, and Barthe’s theory of “hybrid forums” as a starting point for how we might reimagine deliberative events like the ones sponsored by the FDA.

While I’ve not yet fully worked through the theoretical and practical implications of what it would mean to “decriminalize” uncertainty, I’m confident that these moments, some of which I’ve described above, are significant. They’re the kinds of fractured, unwieldy, complex rhetorical events that are hard to study. And this is precisely why I’m drawn to them as a rhetorician.

Work in Relation to Symposium Keywords

Ethics and dissemination are the words that resonate most with my work.

I’ve spent so much of my early career thinking about decision-making very safely. That is, I’ve gotten really good at analyzing and critiquing what kinds of moves are made, but by the end of my own arguments I have a hard time zooming back out to why this matters to humans. I could benefit from considering ethical dimensions.

Broadly speaking, rhetorical theories provide lenses through which we see the world. As a medical rhetorician, then, I see, critique, analyze, and produce knowledge about medical facts, findings, and decision-making through particular rhetorical (i.e. Toulminian, Perelmanian, Burkean, Aristotelian, etc.) lenses. These lenses are useful in that they may provide a common language, a core set of methodological techniques, and/or ideological/philosophical motivations from which “truths” (about health, medicine, wellbeing) are constructed.

This is a good question and one I’ve not yet fully worked through, myself. But I’d be really interested to hear how others answer this question. I see myself first and foremost as a researcher in Rhetoric and Writing Studies. My objects of study are medical and scientific in nature because they are complex spaces where rhetoric and writing are so interesting and meaningful in both a personal and public way. So, for instance, in my book project, I’ll discuss uncertainty as a rhetorical problem, but use medical and scientific settings/deliberations/scenarios as the exigency for better understanding that particular rhetorical problem. I’d like to believe that ascribing to a common set of rigorous, reviewable methodological practices are what define who we are, regardless of our research question or object of study (in the way that “science” is “science” because they ascribe to the “scientific method”). But I’m not so sure there’s consensus on that.

I’d add accommodation. In almost every project I’ve engaged in since graduate school there has been some rhetorical act of “translating” information or knowledge for one audience to another. These translations are rhetorically meaningful. They’re where what we value rises to the surface (think: “Affordable Care Act” ßà “ObamaCare”).

I struggle with what Ellen Barton calls “disciplined interdisciplinarity.” That is, I don’t know how to more readily make meaningful my research to scholars and practitioners outside of rhetoric, and yet I strongly believe this is how we make ourselves indispensible in the age of STEM. I long to be more than the token humanist invited by a group of environmental or medical scientists onto a grant proposal. I wish for a more disciplined approach to making what we do matter in terms of public policy decisions, grant funding decisions, and elsewhere.